First things first: welcome to anyone linking in from Liz's LiveJournal or HameBlog.

Here is the photo album of Liz's, Karen's, Hamish's and my adventures in Sutherland last weekend. Just click on the first image in the set to get started (or by all means scroll through the four index pages if there's a specific pic you want to see.)

Be warned: the album's pretty big - not for the faint hearted, or those of you with dialup internet unless you're very patient - we took well over 300 photographs between us and even after weeding those down the resulting album still has 165 images in it! Some of those are merged panoramas which (unless you have a HUGE monitor) you'll need to scroll left and right to see all of.

Please feel free to leave comments about the album here - hope you enjoy it!

oh and appologies for the slightly rough-and-ready merges, and the occasional error in the captions.
Posted by Patrick at 6:02 pm No comments:
Email ThisBlogThis!Share to TwitterShare to FacebookShare to Pinterest

On Friday night three friends and I crossed the country going North West. We went almost all the way to the top left corner of Scotland. Cape Wrath (the actual top left corner) is inside a military bombing range and impossible to get to at this time of year, but the little town of Kinlochbervie is within walking distance of the Cape and has a comfy and affordable hotel in it. That's where we went.

The three friends were Liz, Hamish and Karen - Liz and Hamish have also blogged about it, Karen hasn't because she's still resisting using her blog for anything much - three view points on one weekend is probably more than enough anyway...

I spent most of my childhood summers in that part of the world, and I've been back since but never with friends before... whenever I've been back by as an adult in the past, solitude has seemed to resonate perfectly with Sutherland's bleakly beautiful landscape. It turns out though that company harmonises just as well with the otherworldlyness of that part of the world.

We spent our days meandering along the twisty single track roads together, mostly aimlessly if I'm honest. We did have a couple of vague goals, but since Liz and I both love driving, and the entire area is so utterly Other, going anywhere and everywhere was aim enough most of the time. Sometimes we went to white beaches where the ocean boiled over black rocks, sometimes we'd just stop to walk on the rolling red heath we were passing through, we walked around a mostly deserted M.O.D installation which was built as a radar station but never commissioned, poking about what remains of the hippie-ish craft village that's been housed in its blunt little buildings for the past 40 years or so. Once we visited a cave where a river disappears into the ground in a thundering torrent of white foam and brassy peat-stained water... all of it was breathtaking which makes it seem strange that we never stopped talking.

My friends are exceptionally smart, funny and engaging people, and I'm discovering that road-trips with them are really really fun. evenings we mostly stayed in the hotel curled up in the warm comfy lounge after our ridiculously big meals, chatting about everything and anything. On the Sunday evening the cloud cover lifted so Liz (who'd kindly abstained from drinking) drove the rest of us a couple of miles up the road to my favorite place in the known universe: a beach called Oldshoremore.

The idea came about from a dinner Hamish had been to months ago, (read his blog for more on that,) but I knew that if we got a clear night Oldshoremore was the place to go. Sunday night turned out to be not just clear (for a few hours at least) but also moonless. At first this made things interesting as there's a graveyard between the beach and the car park. Missing the path (which sensibly goes round the cemetery) I took us right through it... in the dark... none of us is particularly easily spooked but we stuck pretty close to the wall all the same. Once on the other side of the wall we found the actual path and made it down to the sand where we saw more stars than I think I ever have before, including many many shooting ones...

I suspect it's impossible to do justice to that night (or indeed the weekend as a whole) in a blog entry but I hope I've managed to convey some sense of just how good a time I had over the past few days. Once Liz and I have sorted through all the photos I'll be posting an album of them (probably tomorrow) for now though I'm going to leave it at this.

Posted by Patrick at 4:11 pm No comments:
Email ThisBlogThis!Share to TwitterShare to FacebookShare to Pinterest

Hi all - just a quick post to say I'm safely back from Kinlochbervie and will be posting all about it tomorrow when I'm rested: I had a fantastic time but did spend rather a lot of it at the wheel so today I've decided I'm officially responsible for nothing and am vegging out at home with my sofa, a duvet and some stupid telly... have to clean the car - at least the inside which is full of road-trip detritus - I was hoping to clean the outside too but it hasn't stopped raining all day...

Sutherland in autumn is astoundingly pretty and we all took lots of photos on our holiday, Liz has already posted some together with some of what we did and saw on Saturday, if you like you can see that all over here. She and I are sorting out all the photos (roughly 300 or so) after work tomorrow and I'll condense those into a managable album later in the week, in the meantime here's a little sample: 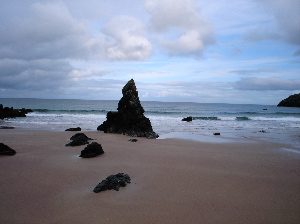 Posted by Patrick at 4:44 pm No comments:
Email ThisBlogThis!Share to TwitterShare to FacebookShare to Pinterest

tomorrow afternoon I'm going on holiday - half-term starts at work at lunchtime and having worked very hard since the start of term (a most unusual stae of affairs!) I'm really very ready to go away somewhere and just be - happily I know just the spot and even more happily some very good friends are coming with me, 's a long way though, all the way up and left - look:

I can't wait! promise to tell you all about it when I get back
Posted by Patrick at 8:15 pm No comments:
Email ThisBlogThis!Share to TwitterShare to FacebookShare to Pinterest

fable of the transmission fairy?

Once upon a time, (also known as Tuesday morning) a little poorly car called Bags went to the garage to be mended - Bags had a faulty clutch which was making it hard for him to engage gears so being a FIAT Bravo* he limped valiantly to the palace of Arnold Clark FIAT in Edinburgh where he knew there were wise and good mechanics who could heal his poorly clutch. Miraculously while he waited outside the palace for a mechanic to see him, Bags' clutch was healed! and there was much rejoicing...

not really very plausible eh? the guys at the garage insist that they haven't done anything to my car, and that there was nothing wrong when he arrived. I know this isn't so - I sat in the car for a full five minutes trying to get the malfunctioning clutch to engage first gear on Tuesday morning... I made a fuss on Tuesday afternoon and insisted that they keep the car overnight and look at it in the morning (which is when the fault has been worst) they did, this morning they still couldn't find a problem so they stripped out and cleaned the gearbox, changed the transmission oil. Then they asked me to come and collect the car and bring it back if the fault (which they still maintained they'd never seen) repeated. Happily they didn't charge me anything since they'd been unable to find the fault I brought it in with.

The clutch is now fine even though (supposedly) nobody's touched it. Gear shifts are as effortlessly smooth and secure as the day I bought the car so, either my car was visited by some benevolent spirit on Tuesday morning, or the mechanic charged with moving it into the garage couldn't get first to engage and so tightened the clutch cable on the forecourt thus fixing the fault the car was in for - either way I'm very happy to have my car back not least because Liz and I are driving ourselves, Karen and Hamish a very long way in it on Friday afternoon... but more on that later

*no, I'm not a member, I'm just amused that there's such a fanatical following for a car that Which? panned as supposedly being "almost comically unpopular with people who've bought one", I bought one and I love it, seems I'm not exactly alone so I have no idea who Which? have been talking to
Posted by Patrick at 8:32 pm No comments:
Email ThisBlogThis!Share to TwitterShare to FacebookShare to Pinterest

sorry folks - been incredibly busy with work of late...

*sound of readers falling off chairs*

... yes, I said work, no I didn't get a new job, I just appear to have been doing this one too well for the past three years, with the start of the new school session in September I suddenly had a lot of extra responsibilities and stuff to do - it's settling down now though: most of the frantic preparatory work for changed aspects of splatjob is done, and I can get back to the serious business of applying for a new one.

Work is a lot better than it was last session, and I love my colleagues but the fact remains that there's no scope for progressing in this job so I still feel the need to move on as soon as a suitable opportunity presents itself.

In the meantime though the gap between where I am and where I want to be seems smaller and I'm less frustrated by the day-to-day stuff of working in a school. All good.
Posted by Patrick at 10:18 am No comments:
Email ThisBlogThis!Share to TwitterShare to FacebookShare to Pinterest
Newer Posts Older Posts Home
Subscribe to: Posts (Atom)
splateagle.com