What a great birthday!

So the 17th was brilliant. I had a little cache of prezzies to open when I got up and when the post came it was all brightly coloured envelopes with cards in. I felt very loved. From 5pm onward friends came and hung out celebrating, games were played, drink was drunk, more presents and cards materialised. I felt even more loved. Around 4am the last of the party left. I reckon an 11 hour birthday party is pretty good going for 34.

The cards are all still up, I'll take them down before I go on holiday on Monday (off to France for two weeks) but I've been really enjoying them.

Outside all that it's been an OK week. I've been faltering with work a little lately which upsets me. I think the holiday is well timed: six months in and taking a break from my new working life seems like a good idea... time for taking stock personally too. I'm confident I'll come home re-energized and re-engaged, but I do feel that - in some ways - I've let some people down over the past couple of weeks. Myself included.

All part of the process.

Working out where to go from here, and going there is the main thing.
Posted by Patrick at 9:11 pm No comments:
Email ThisBlogThis!Share to TwitterShare to FacebookShare to Pinterest

A present is arriving. Some time in the next hour, the door will go, and a birthday present will arrive. So I'm told anyway. It's a day early but that's on purpose, and best of all I still get to open it today. A more conventionally delivered present arrived four days ago and I've been good: that one is still in its jiffy bag waiting to be opened tomorrow. The one arriving today has to be opened though or bits of it might defrost.

Exciting!
Posted by Patrick at 2:55 pm No comments:
Email ThisBlogThis!Share to TwitterShare to FacebookShare to Pinterest

Taking a break to make more coffee just now I spotted the postie had stealthily* dropped a parcel through my door - exciting! Turned out to be a copy of Dad's latest book 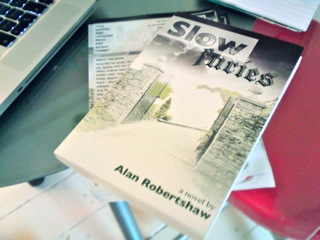 A happy surprise! I'd totally forgotten he'd promised me a complimentary copy. Will enjoy re-reading it (I read the manuscript before designing the cover, but it's not the same as having a proper paperback in your hand).

If you're in the market for a new read, and enjoy darkly atmospheric stories with unexpected twists, I'd heartily recommend getting a copy.

*nothing to do with me having the music on too loud to hear it land. no no no. Definitely stealthy postie. :D
Posted by Patrick at 3:30 pm No comments:
Email ThisBlogThis!Share to TwitterShare to FacebookShare to Pinterest

Curiously, after being entirely happy for a comparative eternity using the same handset* I suddenly find I'm impatient for its replacement.

My first ten years of mobile phone ownership I stayed at or near the leading edge, always with a fairly new, fairly high spec machine in my pocket. Then last time around smartphones had begun to mature from the buggy nightmarishly complex and unreliable devices that Hamish seemed to be replacing every other week, into... well into iPhones (or Androids if your bread's buttered on the perverse side).

I ummed and ahhed for a while then, but eventually plumped for the last of the great candybar SonyEricssons instead. Data costs and contracts were still very high, but more than that I've relied for years now on my phone to also be my camera, and in '08 the iPhone wasn't there yet.

it is now though. And the plans are reasonable. Smartphones (it seems) came of age while I was looking the other way. So with my battered old C902 soldiering on well past its sell-by-date** and Orange tempting me with "free" upgrade time (I know it's just a ploy to tie me to another two years' contract but it's always worked well for me in the past) I'm impatient to join the 21st century... but annoyingly my personal upgrade cycle is out of step with Apple's and the available iPhone model is old and rumoured to be being replaced "any day now"... so I wait. Shouldn't be a problem after all this time but still I'm suddenly (uncharacteristically) impatient.

In unrelated news I fixed the comments code (somehow Rapidblog was pointing at Disqus instead of Blogger. Not sure how I missed that...) so should anyone have anything to say in response to these ramblings, you can again. :)

* OK, so "since Summer 2008" is not an eternity in any conventional sense, but in gadget terms it really is.

** I must be getting old, but they don't seem to make them like they used to: almost all my old handsets went on to live long and productive lives with other family members, but the C902 is falling apart after a mere 3.5 years. I suspect the poor old thing will be consigned to a drawer as a backup when its replacement finally arrives.
Posted by Patrick at 8:43 am No comments:
Email ThisBlogThis!Share to TwitterShare to FacebookShare to Pinterest

Not with a fizzle... 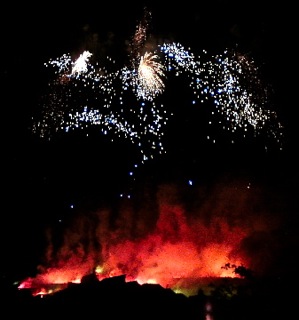 So that's the Festival finished for another year. It's been a really good one. This year for the first time I watched the closing fireworks from on Princes Street too which was fun, especially since the weather stayed pretty much perfect throughout and the crowds were tolerable.

Lovely atmosphere. I met up with Denise, Ivan and Sonja, and the four of us oohed and aahhed our way through the show from the foot of Castle Street - well within earshot of the concert in the park (another advantage to being on Princes Street rather than up a hill watching from a distance - as I always have in the past - is not having inane Forth One DJs interjecting waffle inbetween the pieces).

I think my favorite non-pyrotechnic bit of the evening were the two excitable young German tourists in front of us: they'd set up their DSLRs on tripods and were snapping some splendid shots of the show* so I assumed that had been the draw for their visit, until they turned to us in a gap between pieces and asked "this happens every year?". Turns out they just happened to be in town on a school trip! They'd heard about the fireworks this afternoon and turned up on spec. They seemed amused when (having totted up the annual big display count as 2) we dismissed the Tattoo Fireworks (which they had seen photos of) as not really counting "because it's only small". I laughed too - Edinburgh does funny things to your perspective on these things: Ivan reckons he saw more fireworks in the first twelve months of living here than in his entire life beforehand.

Nice to be reminded how special this place is.

Partly I think because I was prevented from seeing this year's Hogmanay display, partly because we're close to the start of my 35th year, and partly because the start of 2011 was (to put it mildly) rubbish for me, but I can't help looking on tonight's display as a kind of personal New Year celebration: I feel energised (as often seems to happen at the start of Autumn) and optimistic. Committed to moving forward into more new and exciting things in this wonderful place I get to call home.

* unlike the feeble efforts of my phone. I shot plenty but only really got one halfway good image. Ah well.
Posted by Patrick at 10:42 pm No comments:
Email ThisBlogThis!Share to TwitterShare to FacebookShare to Pinterest
Newer Posts Older Posts Home
Subscribe to: Posts (Atom)
splateagle.com