Hell, It's about time.

Hello my name is Patrick and I'm a geek. Just in case you didn't already know. The specific geek-ness I'm talking about today is concerning this about which I have been giddy since the 19th of May when I stumbled accross Blizzard's announcement that they were (after almost a decade) making a sequel to my favourite strategy game ever.

Why am I blogging about it today then? well because today's post had this: 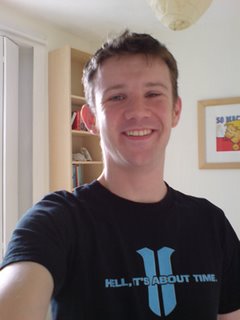 which (aptly enough for the slogan) I ordered two weeks ago but I'm still very happy it's finally here... if only the wait for the game was likely to be as short as the wait for the tee shirt was...
Posted by Patrick at 7:11 pm No comments:
Email ThisBlogThis!Share to TwitterShare to FacebookShare to Pinterest

For some unknown reason every time I've opened this window to start a blog entry over the past few weeks my mind has gone blank, but every time there is more stuff to blether about. So today I'm determined to bash out an update - it's Sunday evening, I have Harriet Wheeler warbling away to me in the background and a nice glass of plonk beside me. I might cheat and repurpose a few bits from emails but here goes...

Work's still a joy: I had my 3 month review the week before last (a bit early) and it went blindingly well - we tinkered with my job title to better reflect the multi-hatted nature of what I do, and (in spite of my explicitly saying I didn't expect one) I got a raise for being so good at my job. Hurrah! Ooh and I got my very own account to manage which makes me happy.

Plans for my birthday have been pretty much finalised for a few weeks now and I'm really looking forward to it: to celebrate the start of my fourth decade a bunch of us are off to Guisachan, it'll be my main holiday this year (2 weeks) and I'm almost daring to hope that we might get an Indian summer after all this rain... well you never know.

Almost a year on from deciding to be carless I'm now almost free of the V5C... I won't go into all the details of the saga and especially not about the last two months (grr) but today I finally got Frank back and all being well I'll be handing him over to my good friend James at the start of August - hopefully having his own wheels will mean James visits more often so he can be further convinced of the need for him to move to Edinburgh!

Meanwhile I'm enjoying vicarious car shopping by helping out my friend Jo (whose ancient 306 recently died in the middle of the Forth Road Bridge). Jo is great and (it turns out) lots of fun to go car shopping with: for one thing when she asks questions about something, she's actually interested in the answer so I get to come away from it feeling like I've been useful and helped her understand something (which is always fun for Patricks)

So far we have seen several duds of varying degrees, but Jo has become a seasoned car-shopper and hopefully will land something perfect soon... which will be kinda sad for me since I'm enjoying having an excuse to be a car-geek.

Yes, I know: I am a freak. A useful and happy freak though so that's OK.

Friday I went for dinner at Monster Mash with Hamish, Marja & Chris before joining Jen, Alexis and someone new whose name I forget (sorry) at the theatre. We saw this which was baffling but very good. It stared a sofa, which is not to say that the sofa stole the show* but that (because of some clever, and plot-relevant staging) it was the first thing all of us mentioned on leaving, and will probably be what we remember the play for. That and being darkly disturbing but excellently well acted. If you get chance and are so inclined I'd recommend it.

Rain keeps raining here as well as over most of the rest of the UK, happily Edinburgh seems disinclined to flood and we do get plenty of nice bright spells in amongst the downpours. I'm wondering where summer is.

That's far from everything but it's enough for now, I'll endeavour to be less rubbish with the updates in August.

* it moves, slowly turning round in a circle throughout the play. It's such a gradual movement though that for the first 25mins I (and - as far as I can gather - the whole of the rest of the audience) couldn't help being distracted by apparently having misremembered its position on the stage. It wasn't gratuitous though: there was a point to it and it was terribly clever, if a bit distracting.
Posted by Patrick at 9:15 pm No comments:
Email ThisBlogThis!Share to TwitterShare to FacebookShare to Pinterest

Well, to this actually.
Posted by Patrick at 9:19 pm No comments:
Email ThisBlogThis!Share to TwitterShare to FacebookShare to Pinterest
Newer Posts Older Posts Home
Subscribe to: Posts (Atom)
splateagle.com