Just a quick 'un. Might manage a real post later in the week, especially if I get chance to take any pictures: my house now has a passably civilised back yard for the first time ever, thanks to a lot of hard work by me and Liz this weekend. Needs part of one wall apinting and a bit more gravel though so no pictures yet.

Night!
Posted by Patrick at 11:38 pm No comments:
Email ThisBlogThis!Share to TwitterShare to FacebookShare to Pinterest

OK rattle gun update because I have no time (still)

I now have a nephew! (more on him when I've met him), the house now is almost ready to be sold (more on that when I have a schedule and advert to point to) ... as soon as I find a buyer of course (plenty more on that no doubt when I need to vent later this month), my job is still keeping me busy, paid and happy on the whole (though April and the end of my contract are looming a bit) my lovelife is a mess (nothing new there then) I've been to see some incredible films lately, have lots to say about them all and no time to type it all up, (sorry). Keep discovering new music too, same problem there.

Last night I saw some pretty good live comedy, in spite of the evening being hosted by (possibly) the most intensely unpleasant... being who I've ever encountered: namely a <cough> "comedian" called Bruce Devlin. I've suffered him before at The Stand but he wasn't supposed to be there last night or I'd not have gone. However, once Bruce got off the stage and let the comedians out, the night picked up. Three of the acts in particular were very funny and worth looking out for again... but they were all very new, so even if I could remember their names, I couldn't direct you to them... ask Liz she's much beter at that sort of thing than me.

The insurance company decided that it would cost too much to pay for fixing Bags after the crash. I cried. He is however (as far as I could tell) being repaired, just not for me. Anyway, distraught and having been given the impresison I'd get next to nothing back from the insurers*, I set about finding the best way to spend a tiny budget on a reliable car, that would be up to the job of helping me commute for (hopefully) no more than the next six months or so. After some careful homework I decided an old SAAB 9000 looked like a good bet for the job and set about finding one. I did. look: 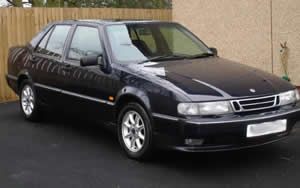 He's a 1996 SAAB 9000 CD, 2.0 litre turbo called Frank, and unless I'm mistaken (in which case I'll find out when the garage look at him tomorrow) he's in good enough order that he and I will be happy together for the remainder of my car-owning career**. Here's hoping anyway. Frank's also quite unlike anything else I've ever driven - fun but also really relaxed. There's this odd air about him that makes it hard to feel like you're in a hurry. In spite (or possibly because) of the huge engine and ability to go very fast should you want to, there's never any rush about driving that car and (I gather) I drive him even more sensibly than I did Bags. Which is good I suppose.

*it now appears the claim on Bags will pay out considerably more than I spent on Frank... which will be really nice if and when the insurers actually cough up

**note: I plan on ceasing to own a car once I can move back to Edinburgh. That holds for the forseeable future unless I somehow become rich enough to own a car in spite of the massive financial burden they all are. In which case I will return to the land of car ownership with glee... 's much more likely however that Frank will be my last car for quite some time. Possibly even forever?
Posted by Patrick at 9:02 pm 1 comment:
Email ThisBlogThis!Share to TwitterShare to FacebookShare to Pinterest
Newer Posts Older Posts Home
Subscribe to: Posts (Atom)
splateagle.com