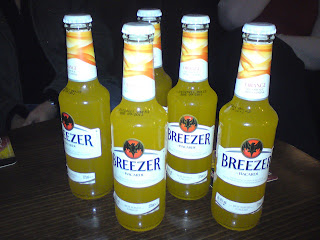 Richard we miss you. Clearly the quiz also misses you because it's giving us copious Rich-prizes to lure you back.

*the answer being "Brisbane" as the jammy sod has emigrated with his lovely wife.
Posted by Patrick at 11:24 pm No comments:
Email ThisBlogThis!Share to TwitterShare to FacebookShare to Pinterest

I think one of the (many) signs of a good gig, is finding yourself paying £3.50 for lukewarm Jamaican lager, and not really minding.

Thank you Bombskare. Reliably awesome as usual.
Posted by Patrick at 10:47 pm No comments:
Email ThisBlogThis!Share to TwitterShare to FacebookShare to Pinterest

I have a massive bruise on my right knee and no idea at all how it got there.

I don't have any unaccounted for hours in the past week or so that I know of, and it's (just) too high (not too mention too large and angry) to have been the work of my glass coffee table... I am baffled. Baffled and bruised.

Knee bruising pixies that come in the night perhaps?
Posted by Patrick at 4:20 pm No comments:
Email ThisBlogThis!Share to TwitterShare to FacebookShare to Pinterest

My sister bought me a bunch of kitchen stuff this xmas. Amongst which was a red oven glove, the type with two mitts joined by a strip of material? well from where I'm sitting, hung over the handle of the oven it makes my cooker look like it's sticking its tongue out.

:D
Posted by Patrick at 6:14 pm No comments:
Email ThisBlogThis!Share to TwitterShare to FacebookShare to Pinterest

Changing the bed, and finding I have to use the last of the pillow cases he folded.

This gets easier at some point right?
Posted by Patrick at 5:50 pm No comments:
Email ThisBlogThis!Share to TwitterShare to FacebookShare to Pinterest

So I have a confession to make. I missed the election. Infuriatingly the one they're calling Scotland's 1997 as well! Buggrit.

As you might have gathered, I've had a lot on my plate recently. I had remembered that I needed to update my entry on the electoral roll, but - after spotting that the election coincided with a holiday I'd planned - I only skim-read the documents on registering for a postal vote. I misread them and missed the deadline. Irritating. For the record, Marco Biagi's Edinburgh Central majority would be 238 if I'd payed more attention to the dates*.

So. Mea culpa democracy. I'll be back on form next time. Promise. Thanks for getting it right without me though!

Apologies to those I've already pointed at this (via email or Twitter**.) but if you haven't already, I'd recommend reading the Editor of the Caledonian Mercury's op-ed piece following the results. I'm not sure if I agree with his conclusions or not, but it's a well argued point, and I certainly agree with his position... Interesting times indeed.

* Central is - perhaps unsurprisingly - the slimmest margin in the Edinburgh results, followed by our sole Edinburgh Labour MSP's majority... which is in Leith so that doesn't really count does it? ;) after that they all seem to go landslide-ey for the rest of the capital constituencies, and most of the rest of the country of course.

** Yes, I finally caved. No this doesn't mean you'll be seeing me on FriendFace FaceBook before hell freezes over. I'll get a feed onto the main page when I have a minute for those long intervals between blog posts...
Posted by Patrick at 3:09 pm No comments:
Email ThisBlogThis!Share to TwitterShare to FacebookShare to Pinterest
Newer Posts Older Posts Home
Subscribe to: Posts (Atom)
splateagle.com