Last week my brother and his family came to visit Edinburgh for the first time.

Well, not the first time. My brother's been lots... and he and my sister-in-law have visited together a few times... including once with my nephew when he was very small and I (famously) had nothing but pear cider in the fridge when I left my brother babysitting his son and toom my sister-in-law out for all night festival comedy and coctails.

Last week my neice visited Edinburgh for the first time, the rest of her family came along too.

It was an awesome week all round and part of me's tempted to drone on about it here but I'm not going to, partly because I doubt anyone except future me wants to read that (and he gets plenty to read) and partly because my brother's not always that comfortable with me putting details of his and his family's life out on the open interweb. Understandable. Besides all of that I'm rusty at blogging and my fingers would probably wind up sore.

Instead I'm just going to blog about going with all of them plus Justin and his two daughters to Glasgow's (relatively) new transport museum, Riverside Museum.

If you haven't been (and live in Scotland) you must. Hell if you haven't been and don't live here I'd recommend it should you make the trip. It's a fantastic place, the building itself is worth a visit in my book and that's even before you get to the wonderfully presented exhibits. There are shelves of old cars* rambling displays of mixed vehicles with stories woven through them, an almost hypnotic wartime subway to ride on, and a victorian Glasgow pub (on the recreated victorian Main Street that occupies one corner of the museum where you can explore all the shops...) populated with ghosts by a genius use of video screens as pub mirrors.

Sadly none of my photos really does the place justice but in amongst all the failed attempts at panoramas and interiors is a rather nice reflection of the tall ship in the river front glass of the building: 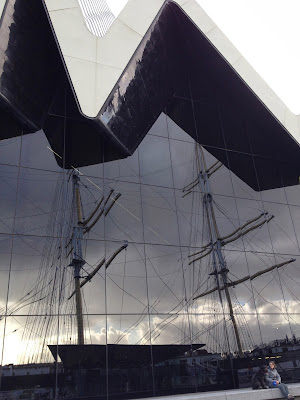 Fantastic to see a celebration of transport and transport design so well designed in and of itself. Can't wait to go back.

* Some amongst us (OK we four grown-ups) were distressed that "old" includes cars from our childhoods and even in one case one of our first cars. Tempus fugit.
Posted by Patrick at 6:59 pm No comments:
Email ThisBlogThis!Share to TwitterShare to FacebookShare to Pinterest

It's a scientific and technological icon of my childhood. Quieter and more understated perhaps than Concorde or The Shuttle, and (in spite of its many cinematic cameos) certainly far less ubiquitous than the Compact Disc or Velcro. But its completion in 1980 marked the beginning of a new era in space observation and it's such a powerfully evocative structure that it's long since seeped into my subconscious as the image of our planet's eye on the universe.

Jodie Foster's narration and the stunning cinematography combine to make a hym to this technological, scientific monument of my age. It's deeply moving.

What's even more moving is learning that (unlike most of my other examples - Velcro notwithstanding) The VLA has had a C21st rebirth, marrying its breathtaking late C20th macro engineering with the best of early C21st micro technology to produce an instrument with all the majesty and grace of the original, but many times the capacity to (further) enrich our understanding of the universe we inhabit.

I salute you VLA.
Posted by Patrick at 11:47 pm No comments:
Email ThisBlogThis!Share to TwitterShare to FacebookShare to Pinterest
Newer Posts Older Posts Home
Subscribe to: Posts (Atom)
splateagle.com