Yesterday I cast my vote for hope.
It drowned in all the fear.
Posted by Patrick at 7:14 am 1 comment:
Email ThisBlogThis!Share to TwitterShare to FacebookShare to Pinterest 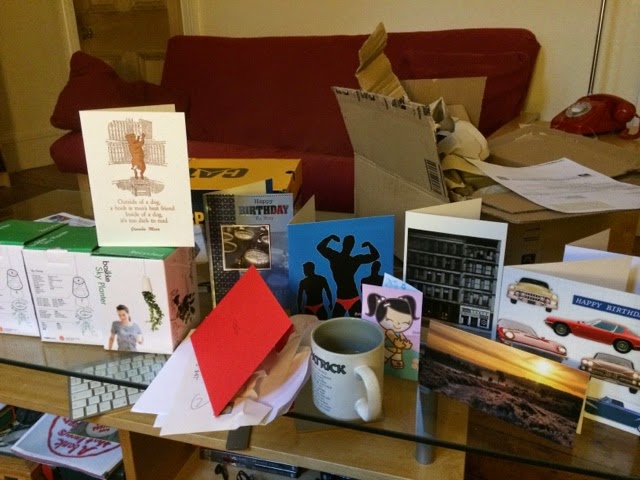 I'll be 37 in an hour and seven minutes (or thereabouts).

It's been a long couple of years, and I'd love to say that my tiredness is due to tireless campaigning for a just cause since the referendum was announced. It hasn't been. I'm a fervent and committed Yes and have been since day one. I've even done some volunteering to try and get the right result the day after tomorrow. I'd be lying if I said I'd done masses though, or even enough. I guess I'm not really wired that way.

So yes this is a bit of a referendum post.

It's not my last ditch attempt to make up for lost time though, nor do I really expect to convince anyone at this late stage (or in this narrow, forgotten corner of the internet that is my own). Like pretty much every post here for the past eleven and a bit years this is for myself, put it into the world in case it provokes interest/discussion/laughter in the wider world, but if there's a purpose to these posts they're definitely for myself.

I'm not out to make the case for Scottish independence. For one thing it's getting late. For another, so many others have done that much better than I ever could.

This is for me. If it interests/puzzles/amuses you so much the better.

At some point in my dim forgotten past I fell in love. I was taken out of the world I knew for a time. Out of a world of frustrated protest: of miners' strikes and teachers's strikes... a world of loss: friends' parents being laid off (before I even really understood what jobs were), shops that shut and never opened again, mines that were demolished... a world where politics was a byword for being ignored, shunned, forgotten and - above all - trampled on.

My childhood was a very happy, sheltered, and relatively privileged one, don't get me wrong. It just happened in quite a sad, broken place. A place where my rapidly developing vocabulary never managed to make sense of words like patriotism or nationality. Where I genuinely struggled to comprehend how anyone could feel love for a country. Let alone for England*. It happened in Thatcher's South Yorkshire. I challenge anyone to be objective from that starting point, but is anyone ever objective?

As I said, at some point my parents brought me north of the border - I forget the first time - but I do remember that I fell in love.

Like any young love affair it was arguably an infatuation, at least at that stage. I certainly didn't see the whole picture holidaying in Sutherland for two weeks! But something about Scotland always felt different. Felt special. Each time I came back - whichever part of this country I came to - it all felt special in a way nowhere else ever has.

When I moved here to study for my degree, my instinctive (arguably infantile) infatuation matured into an understanding of Scotland as a place distinct from the rest of the country I thought that I knew. An understanding that "the UK" wasn't in fact one place at all. That and an understanding of why someone would die for a place. I began to understand the concept of national identity.

Hardly surprising then that I never left.

Hardly surprising then that almost two decades later, when someone asks where I'm from I confidently, honestly answer that I'm Scottish.

From the very first time I encountered this country I've felt there was something special and different about it. Over the past few years that feeling has driven me to learn more about my adopted home, and what makes it different. The more I've learned the more convinced I've become that this place could - and should - be so much more than it's able to be as part of the UK. That it could and should be a better home for the people who live here.

Birthdays for me have always been good things. Life has - on the whole - been kind to me, and each year I've lived to date has been better than the one before. Birthdays for me are a time of happy reflection and optimistic hope.

That would be an amazing start to my year.

* A word I was shocked to learn later in life I had - as I believe most people south of the border do - unconsciously mistaken as synonymous with "the UK".
Posted by Patrick at 10:53 pm 1 comment:
Email ThisBlogThis!Share to TwitterShare to FacebookShare to Pinterest
Newer Posts Older Posts Home
Subscribe to: Posts (Atom)
splateagle.com