For some time now I've been watching the plans for redevelopment at Haymarket with some interest. Back when the proposals were originally announced I was living in the neighbourhood, and - while I spent two of the intervening years living in Stockbridge - I've always been fond of the area and felt it deserved a bit of care and polish. Since moving back to this neck of the woods a couple of years ago I've kept an occasional eye out for developments, in amongst watching the (interminable) Tram project of course.

Picking Hamish up from the station on Thursday I subconsciously noted new hoardings there with some fairly disappointing "artist impressions" on, and must have made a kind of mental note to look into it, since that's what I've been doing while Hame's at the book fair he came down for.

Now to put this in context, for the past six years my mental image of what's coming when they finally give my local train station (and Scotland's fourth busiest) it's (desperately needed) overhaul has been loosely based on the visuals from Aedas' Haymarket Interchange outline proposal*. Primarily this one: 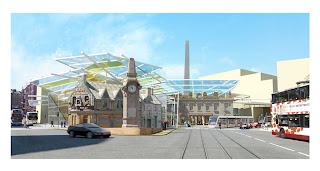 Much as I was saying in my last post about the success of the old ERI site's redevelopment, I feel this suggestion shows the strongest, most successful mould for modern architecture in an ancient city like Edinburgh: framing the old with a light but bold touch of the new.

Imagine then the crushing disappointment I experienced viewing the utterly uninspired and flat designs Network Rail have chosen from IDP Architects: 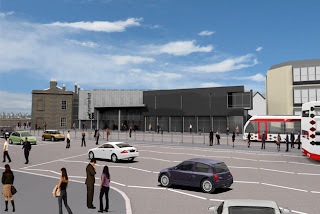 Where's the dialogue with its surroundings? Where's the integration of the old and new... above all where's the sodding design!? This lumpen box lurking behind the original station building has nothing to contribute to Haymarket's passengers or its surroundings beyond square footage. It looks as if the architects primary concern was that there weren't enough shadows for their building to hide in, and so they have put all their effort into making some.

Seeing the potentially missed opportunity here pains me - if this pathetic proposal from IDP is what gets built, then a chance to really enhance the western half of the city centre will be lost. I appreciate that Aedas' 2005 sketch is just a sketch, but I'm not the only one surprised to see such a poor job being done on the projected design. Last year rival firm Richard Murphy pitched a rival plan in the Architects Journal, while in a spectacular act of diplomacy calling IDP's designs "unambitious".

I fervently hope that before work begins in ernest, Network Rail are brought to their senses and commission something more ambitious, and more fitting to be part of this city's inspiring architectural surroundings, than this limp, apologetic, soulless lump.

* interestingly the inspired Aedas visuals are still the ones being used on the project's site to illustrate the proposed redevelopment, which is somewhat worrying since they're not at all representative of what's actually being planned.
Posted by Patrick at 5:41 pm No comments:
Email ThisBlogThis!Share to TwitterShare to FacebookShare to Pinterest

My friend and former flatmate Hamish is visiting! For the first time since he and Craig moved up to Wick in 2010 he's down for a proper* visit.

Mostly the plan while he's down is to hang out and chat, interspersed with some watching of movies and goofball TV - just like old times really! Since these days we're both self employed, we've both been working today, but also hanging out which has been great fun.

As a change of scenery mid afternoon we took a wander to get some air and to reacquaint Hame with the city he called home for a decade (and which he thinks of as his "Scottish home town"). I took a bit of a gamble in choosing the route and took us through (amongst other things) the new Quartermile development. Work had started there before Hame and Craig left for the frozen North, but (while it's far from finished) the area's begun to feel alive only in the last year or so and I really like it.

I say "gamble" because one of the things Hamish and I have always disagreed on is Modern Architecture. As a rule I love it. As a rule he hates it. Still one of the things I like about Quartermile is the way the old buildings of the former Royal Infirmary have been restored (on the surface at any rate) and re-presenced within the new development.

To my delight the gamble paid off! Walking through the mix of restored sandstone elegance, and stark glass and steel, Hame surprised himself and me by really taking to the place.

It's always nice to get to share this city that I love with visitors... but there was a new dimension in getting to share the changes I'm excited about with someone who's as fond of and attached to this place as I, but no longer usually here.

Anyway, an old fashioned evening of goofy Sci-Fi (frequently paused while we animatedly discuss things that have popped tangentially into our heads no doubt) beckons!

* It isn't actually the "first" visit of course - there have been flying visits since, but this is the first time he's been here for a few days in a stretch.
Posted by Patrick at 6:00 pm No comments:
Email ThisBlogThis!Share to TwitterShare to FacebookShare to Pinterest

I'm a very seasonal person. One of the (many) reasons I live where I do, is that I enjoy the shifting seasons. I like the change. That said though, people have asked what my favorite season is often enough for me to have thought about it. It's definitely Autumn.

My brother came to visit this weekend. We took a car out into the southern Highlands on a sunny Saturday. Good company, a cracking little car and a sunny autumnal day in one of the most beautiful parts of the planet. Nice to be reminded.

I think one reason I enjoy autumn (apart from the beauty, the crispness, the colour) is the sense of transition. I'm not sure what this year's shift is yet, but I'm enjoying the sense of it... 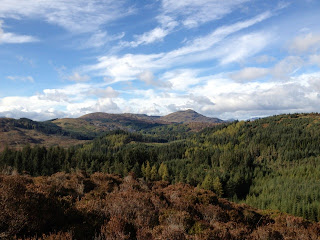 Posted by Patrick at 12:23 am No comments:
Email ThisBlogThis!Share to TwitterShare to FacebookShare to Pinterest
Newer Posts Older Posts Home
Subscribe to: Posts (Atom)
splateagle.com