So having finally booked my tickets and made this trip (which I've been planning in various forms for years) into a reality, naturally my subconscious mind pops up a couple of sudden 'deep breath' type minor doubts, happily (so far) nothing serious and both dealt with pretty quickly but they also both made me laugh so I thought I'd share:

This one hit me on my pre-birthday party, Liz and I were telling Keith about how we were all three taking a tour of the Black Isle Brewery next Sunday and somewhere at the back of my mind a little voice asked me "what kind of beer do you think there'll be in Australia?". Just for a second my blood ran cold: all I could think of were Castlemaine XXXX and Fosters, both of which to give them their dues... are swill.

So that gave me pause, I like beer and the thought of spending ten weeks with none worth drinking available was a saddening one. Quickly I consoled myself with the thought that (surely!?) an entire continent must have more than just two beers, heck... (I thought further) ...the only two french beers I knew of before I went to France were wifebeater Stella and 1664 neither of which is exactly a shining example of the french brewing industry's best, though they are at least perfectly drinkable...

Anyway sure enough, a few conversations with friendly online locals earlier today reveal that they generally hold XXXX and Fosters in just as low esteem as I do, and that there are indeed plenty of Australian beers I've never yet encountered. Hurrah! adventures in beer await! but more importantly I'm not going to the land of (only) substandard lagers.

This one was much quicker and happened this evening. Since we moved Hamish has mentioned "giant" spiders on a couple of occasions, and being a bit of an arachnophile myself (and knowing what a big girl's blouse my beloved flatmate can be) I asumed he was exagerating... until just now when a gigantic (at least by UK standards) spider scurried under the sofa I'm sitting on, startling me somewhat. I reflected for a moment that I'm bound for the land of a million billion potential poisonous painful deaths. Then I shruged: Spiders (which I still love) startle me for a reason, namely my instinct to keep out of their way - if that applies to the harmless ones here in Scotland I'll be fine down under
Posted by Patrick at 9:16 pm 6 comments:
Email ThisBlogThis!Share to TwitterShare to FacebookShare to Pinterest

Happy Birthday to me... I got a year older today, to celebrate this my friends came over last night and we ate some food and drank some drinks and were generally amiably silly together. I got some new toys which made me very happy, and some birthday cards and some booze - all very good. This morning I opened the birthday cards that had arrived in the post during the week which made me grin from ear to ear too... It is good to be reminded that you're well loved. emails and texts have been trickling in all day today, and it's not over yet! I'm reliably informed that there are more cards still to come as well as a rogue present that is lost somewhere in the postal system, all of which is very exciting: I like birthdays that get stretched out a bit like this.

As always watching one's odometer tick round to a new whole number (mine clocked up 29 this time, for the benefit of anyone who didn't know) it's hard not to think about where you've been and where you're going... Looking back makes me smile. A lot. I've had a very good bundle of years so far and they've brought me to a place where I'm very happy and surrounded by people I love. Looking forward is pretty exciting, there are a lot of open-ended bits in my life right now and I'm looking forward to exploring new directions for a few of them over the next year... and talking of exploring brings me neatly onto the next bit of this post... 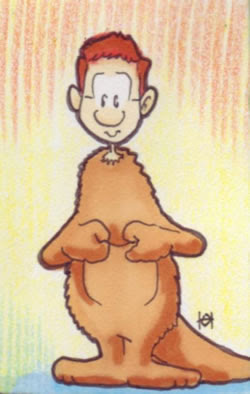 Anyone who knows me will have heard me throw this idea about in some shape and at some point I suspect. Anyway the end of my third decade sees me with sufficient time and money on my hands to get on and actually do it, so I am. I'm booked on a flight leaving Edinburgh on the 30th of October and I'll be returning on the 11th of January. In the meantime I plan to explore down under, concentrating first on Perth/Western Australia and later Sydney/New South Wales, with a brief cat-on-a-hot-tin-roof-esque visit to Ayer's Rock, and a couple of weeks' rolling gently down the sunny Queensland coast, with the whole adventure bookended by short stops in Singapore and Hong Kong. Neat eh?

Should make for some interesting blog posts as and when I get near a computer, more importantly for me though it feels like it'll be what people call 'the trip of a lifetime'. I'd say I couldn't wait except that next week I'm going on a more local adventure with Liz, Keith, Hamish and Lara (and some of Lara's friends and her husband Tim) which I'm really giddy about too!

Thanks to Hamish for the artist's rendition of aussie-me, dubbed "weasaroo", I doubt I'll be donning any kangaroo suits in real life however, especially since circumstances conspire to have me heading to Oz in their high summer! I'm sure I'll cope
Posted by Patrick at 6:15 pm No comments:
Email ThisBlogThis!Share to TwitterShare to FacebookShare to Pinterest

Stupid UPS, where is my parcel!? (replacement headphones, nothing that exciting) So far they've told me twice that they attempted delivery and found nobody in, which would be frustrating enough if it weren't that (because I am currently a gentleman of leisure and Hame works from home most of the time) I know it to be a pack of lies! Nobody has attempted to deliver anything!

In fairness the new place is a bit tricky to find but I'd much rather the driver just said that so it could be dealt with rather than pretending he's been here and couldn't find anyone to take the parcel - because unless he is both silent and invisible I'm pretty sure he has not... and come to think of it silent invisible delivery men are really in the wrong line of work.

[edit] after posting this I called UPS to chase it up, got a very helpful response from their head office who went off to chase it up, then moments later the (non-hot) delivery guy arrived cheerfully carrying my parcel. So all's well once more.

meanwhile the LiveJournal syndication feed of splateagle.com seems to have gone bonkers, so to anyone over at LJ whose friends page just got deluged with a couple of months' worth of back-posts, my apologies, but it wasn't me!
Posted by Patrick at 11:34 am No comments:
Email ThisBlogThis!Share to TwitterShare to FacebookShare to Pinterest
Newer Posts Older Posts Home
Subscribe to: Posts (Atom)
splateagle.com