... I know I know, I'm sorry it's taken me so long but I finally finished tweaking and editing the Australia travel albums and now all three are up on the slightly revamped travel photos section of the site which you can get to the usual way or with this special big yellow button:

edit April 3rd: Fixed a host of typos in the album comments - thanks to Chris for lending a hand with finding all the "teh"s etc... in my defence I am using an unfamiliar keyboard while Flash is away.
Posted by Patrick at 2:53 pm No comments:
Email ThisBlogThis!Share to TwitterShare to FacebookShare to Pinterest

I'm not sure which is worse, discovering that some unnamed gaydar-queen is making up gossip about me, or finding out that a nice guy I went for a beer with recently bought said gossip hook line and sinker (without bothering to ask me about it) and now doesn't want to even take my calls... People can be so disappointing.

Eric, buddy if you're reading this I hope you can take some small comfort from not being the only one this shit happens to.
Posted by Patrick at 8:18 pm No comments:
Email ThisBlogThis!Share to TwitterShare to FacebookShare to Pinterest

... spring is springing (even if it's suddenly got colder) look though: 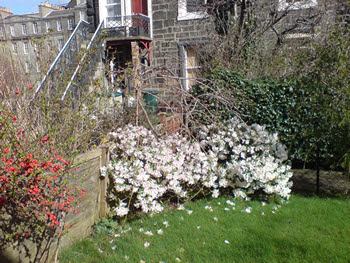 pretty eh? I have no idea what it is beyond "a shrub in the corner of my garden" but it's lovely - the full sized image is linked if you want to click on it not because it's a great photo but because it's a really pretty plant and partly 'cus I'm impressd with my phone for taking such camera-like photos.
Posted by Patrick at 3:09 pm No comments:
Email ThisBlogThis!Share to TwitterShare to FacebookShare to Pinterest

I feel dirty: I just caved and submitted my CV to a few of the city's temp agencies - literally within moments I had an agent on the phone arranging an interview... I've been holding off temping because it's usually mind numbing work and because I'm looking for a real long term opportunity... but the overdaft is approaching critcal mass so it's time to reverse my cashflow and temping should at least do that.

I just hope one of the real jobs I'm applying for materialises before I lose my marbles from filing for some fiscal monolith.
Posted by Patrick at 1:50 pm 3 comments:
Email ThisBlogThis!Share to TwitterShare to FacebookShare to Pinterest 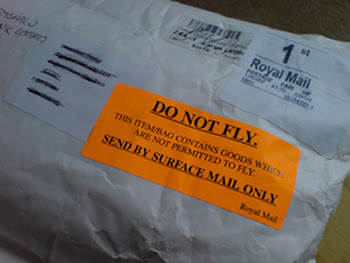 So the long weekend in London was great, I got to catch up with several old friends, made a couple of new ones and generally recharged my batteries for the ongoing slog that is finding my next proper job. All that was good. Getting there and back however was hellish.

I'd been holding off booking my transport while the whole job situation is still unresolved, in spite of knowing I needed to be there for the weekend since December. With the rail network's arcane pricing structures, booking ten days before travelling meant that the train was going to cost me £60 more than flying with EasyJet. I'm a tad cash strapped right now and an extra £60** seemed like a big deal so (in spite of being disinclined to widen my carbon footprint unnecessarily) I booked my £30ish return flights and thought no more of it... until I came to actually travel that is. The journeys both ways were deeply unpleasant experiences thanks to all the nonsensical new airport security arrangements I was prodded, poked, generally treated like a criminal and - worst of all - substantially delayed by. In the end I spent so long being needlessly delayed on the flimsy pretence of security that it actually took me longer to fly to London than it would have to get there by train!

So by the time my parcel* arrived this morning I'd already decided to take the advice printed on it: I'm done with domestic flights. Costs be damned it's just not worth the hassle, discomfort and delay, especially when it already nags at my eco-conscience. I'll happily take planes for journeys that wouldn't be feasible any other way but as far as I'm concerned the days of short haul hops are over.

* The picture is of the deodorant I had to buy in London to replace the one I'd packed and then had confiscated in case it was part of a liquid bomb (which is scare-mongering pseudo-scientific nonsense and physically impossible). I had to either leave the replacement behind or post it back to myself, which I did because I was feeling stubborn, even though it's a ridiculous thing to have to do.
** Irritatingly, I worked out after the fact that I'd spent an extra £30 on getting to and from airports - not to mention money spent on replacement toiletries and the shipping thereof ;) - whereas if I'd gone by train I could have walked to and from Haymarket and would have been delivered to and collected from London city centre at no extra cost. I'll know better next time.
Posted by Patrick at 3:23 pm 5 comments:
Email ThisBlogThis!Share to TwitterShare to FacebookShare to Pinterest

So it looks like I didn't get the penguin job (more power to them - I'm not sure I wanted it), and it's a week or so until my next interview... and (conveniently) I'm committed to being in London to celebrate one of my best friend's birthdays* so I made a virtue of neccessity and came for several days (on the cheapest available transport - next time I will book ahead and come by train, domestic air travel is a pain in the proverbial...) and am thoroughly enjoying myself...

I'm not sure but I think I was probably getting depressed back home: the days at home doing nothing were certainly taking a toll (sleeping until 2pm regularly and feeling generally crap - that's depression-esque yes?) and (maybe) getting away from that for a few days was exactly what I needed.

* note to those close to me: I'm thinking how to celebrate the start of my own fourth decade (in September) and thinking along the lines of a gathering so keep your diaries free and your ears open...
Posted by Patrick at 10:06 pm No comments:
Email ThisBlogThis!Share to TwitterShare to FacebookShare to Pinterest
Newer Posts Older Posts Home
Subscribe to: Posts (Atom)
splateagle.com