I really really love setting my own hours, even though some days it means that I start and finish later than is entirely sociable.

Missed the pub quiz tonight - my choice, but if I'd got more done during "office hours" (9:00am to 5:30pm) I might have made a different choice.

Then again the work I'd have done during the early part of "office hours" (9:30am to 1:00pm) probably wouldn't have been as good - my brain seems to work best in the afternoon/evening.

When I worked on a salary I used to have this recurring disagreement with my boss about what why it was important to be in the office. I maintained that doing the work and doing it well was the main thing. Being available to clients when they needed me was often cited as justification for being at my desk in the mornings...

... 20 minutes ago I received (and immediately responded to) a query from a client. Haven't done that during the day in... well I can't remember how long.

Just sayin'.
Posted by Patrick at 11:30 pm No comments:
Email ThisBlogThis!Share to TwitterShare to FacebookShare to Pinterest

Ducks in a blizzard

So the weather got nice again, Anita and I resumed our plan to go and feed ducks... and by the time we set out it was snowing.

What the hell. We fed the ducks under a bridge in a blizzard and came home to warm up with coffee. Sometimes you just have to accept that you live in Scotland.
Posted by Patrick at 5:11 pm No comments:
Email ThisBlogThis!Share to TwitterShare to FacebookShare to Pinterest

So this afternoon Anita and I had plans to go feed the ducks on the canal (they were rescheduled plans from yesterday, in case anyone's cross-referencing with Twitter). we were meeting at 2pm, 20 minutes ago the persistent rain turned into snow. 10 minutes ago Nete called and (very sensibly) suggested we not go and feed ducks today because it was snowing and horrid outside - I agreed. 2 minutes ago it stopped snowing.

Weather is taunting me!

Also I'm having an unusually animal-ey day. This morning my dreams were full of incongruous and wrong-sized animals: a teeny tiny deer got into my parents' house by mistake and we had to try and get it out but it kept hiding under the furniture. Then we did get it out into the garden and (for no clear reason I can remember) I then had a conversation with my Dad while on a rope swing (which never existed) over a pond (which was filled in years ago) in which were a family of 1/4 scale crocodiles. Later in the same dream there was a hamster the size of a dog at my friend James' house.

Weather's cleared up too but now Anita's working on setting up her new computer instead so the ducks will have to wait.
Posted by Patrick at 1:41 pm No comments:
Email ThisBlogThis!Share to TwitterShare to FacebookShare to Pinterest

Funny thing happened the other day.

I've spent (most of) the past year feeling sorry for myself. Feeling loss. Feeling bereaved. That's all understandable, but not bring able to move past it was worrying me until the other day.

Somehow it struck me that I'd been waiting for something that couldn't happen. I'd been waiting most if last year to feel "OK" again, only my definition of "OK" was skewed. I was waiting to feel OK by standards that no longer apply.

Back to normal then.

Could be worse.
Posted by Patrick at 11:19 pm 2 comments:
Email ThisBlogThis!Share to TwitterShare to FacebookShare to Pinterest

13 months ago I first reported an intermittent fault with my telecoms to Orange Home. I had a working voice line, but only an intermittent broadband connection, and much slower than it should be given that I live around the corner from the exchange. At the time I suggested that the problem might lie with the rather ropey wiring inside the flat - specifically the old style GPO phone point (broken) where the line entered my flat.

Just to reiterate. That was 13 months ago.

Today I finally got a BT engineer sent out. He took one look at the GPO phone point and confirmed my diagnosis (on closer inspection the wiring inside was so corroded and loose that it's a miracle I was getting any connection at all). He's replaced it with a modern master socket, and now - for the first time since I moved in - my broadband is operating as advertised.

Now in fairness to Orange, part of the reason it's taken so long is that this was an intermittent fault. So when I got disheartened arguing with tech support bods insistent on investigating unrelated problems, I'd give up for a while and put up with it. Had it been simply unusable it would have been fixed ages back. That said, it's both heartening and infuriating in equal measures that I'd correctly identified the fault on day one myself. If the tech support bods at Orange had listened to me and done what I asked then, this would have been fixed for over a year by now.

Instead they sent me a stream of unnecessary replacement equipment, and performed idiotic remote tests that shed no light whatever on the actual problem (as well as repeatedly asking me to connect equipment to a master socket which I'd told them wasn't there!) All because we have an idiotic deregulated telecoms industry here in the UK (thank you Thatcher) which discourages service providers from investigating issues in the infrastructure because the infrastructure is owned and managed by another company. Bah.

Still. At least now my broadband works.
Posted by Patrick at 9:22 am No comments:
Email ThisBlogThis!Share to TwitterShare to FacebookShare to Pinterest

Yes I know I'm late - I was busy celebrating. 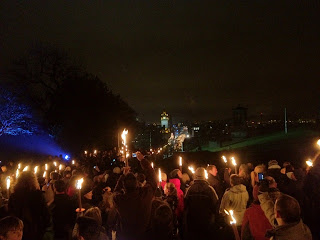 Among the many many things I love about living in Edinburgh is that Hogmanay is a 3 day festival here - we kicked off with the Torchlight parade (above) on the 30th and finished (personally) with a chilled gathering chez Chris (thanks again for the delicious curry buddy).

No fireworks on the 1st (for me) but lots on the 30th and even more on the 31st. NYE itself was great this year - Sonja and Ivan hosted at their lovely flat over the East side of town, with handy access to Calton Hill for watching the fireworks (both overhead and looking down Princes Street toward the castle). I'd never watched from up there and (I gather) this year's secondary display was bigger than it's been in previous years. It was certainly impressive.

Today I've been getting back to work. A far happier state this year than it's ever been before. Lots to do, but all of it good.

Here's to a splendid 2012 eh?
Posted by Patrick at 5:37 pm No comments:
Email ThisBlogThis!Share to TwitterShare to FacebookShare to Pinterest
Newer Posts Older Posts Home
Subscribe to: Posts (Atom)
splateagle.com